The software that I’ve developed has been a result of making my own work easier, and sharing that experience with fellow developers. Interestingly enough, when making these projects, I’ve come into difficulty myself with certain elements of creating them.

One example is my “AGAPI”, so I call it. It is the most advanced, standardized, and functional online interaction and content management API that exists with Game Maker today. Unfortunately, it is in closed beta. One reason is because I want the code to be more organized, and another is the compatibility with studio… But one main reason is the interface. I had to design a completely new interface for all of these lists to hold the data. And when it comes to interfaces, I am completely OCD about it. They have to be smooth, easy to use, and work perfectly for me to enjoy using them. That impression makes a big difference, believe it or not… at least in my experience and opinion.

This brings me to this new idea that will help Game Maker users: A non-DLL, GML-based menu system. After going over the design of the objects, it is actually kind of re-inventing the wheel. Yes, Windows dialogs and controls are there and everything, but I’m talking about web.

The web already takes advantage of the custom controls. In css you can edit the padding, margins, borders, and width and height, and how many items in the list are displayed. However, nothing will be as simplistic or as rich as this, because first of all you can program with it with GML, and secondly, it is done in a designer and generated for you! It’s like front-page, but actually worthwhile using. I mean, this server list is ugly right now, but what if I used the designer to put the graphics in to match the game I have, and spend 90% less time on the interface by having the code already generated for you?

Now, as much as I would like this to happen, it doesn’t mean that I will ever create this program. Firstly, the money has to be there nowadays. I can’t be living in my mother’s basement forever haha. And there also has to be enough appeal for this to reach enough potential users. But, I figured it would be nice to jot down my ideas, so at least theyre publicly visible instead of in my ideas collection next to my desk 😉

I found this article that had a great look at Game Maker 8, and the issues that most of the veteran GM users also recognise: @ moacube.com 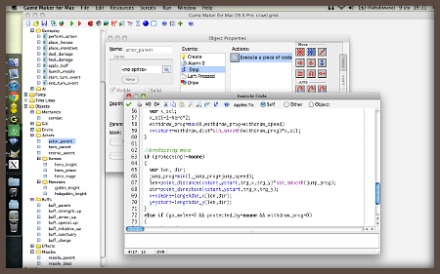 Now that Game Maker Studio is out, I guess you can see where the people at yoyo games were heading on improving their product.

Unfortunately, a point made that, in my opinion, had gotten worse in GM:S, is interface. It may just be me, but the IDE layout means a world of difference. If there is tedious work involved when working with the development tool, it bugs me enough to not want to use it as much. However, GM is still a great tool to use for game making. It just needs a face lift to look more professional, and with that also needs to reduce the number of exception errors there are in its interface as well. Reliability is key for a development tool, so I like to know that it looks a feels like one that can be trusted. It is meant to make a programmer’s life easier after all.

They are taking a good approach, but unfortunately it also alienated other users, in which case I would recommend them sticking to Game Maker 8 in the meantime. (I still think GM8.0 is their most reliable product yet.)

It will be interesting to see what they will come up with in this upcoming year. I haven’t been using the tool as often nowadays, but as I update my “old” software, we will see if I come back eventually.